This is not our first pandemic

This is not our first pandemic

As we’re all attempting to “flatten the curve” through social distancing to stave off COVID-19, it can feel like we’re living in an unprecedented moment in history. However, it was only a little over 100 years ago, on October 8, 1918, when the Idaho State Board of Health issued a statewide order banning all public assemblies in hope of containing the influenza epidemic that would later be known as the Spanish Flu. Schools were closed a few days later, and a doctor local to Cassia County issued the following instructions: 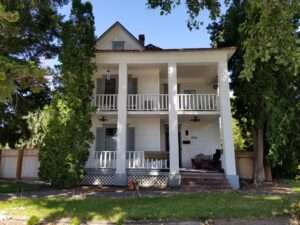 While the doctor’s instructions certainly reflect the spirit of the early 20th century, it’s remarkable to see how similar they are to what health officials are telling us now. There was even a contentious midterm election happening that year, and the pandemic prevented candidates from campaigning locally and resulted in Idaho voters having to come in one at a time on Election Day. In Rexburg, volunteers wearing gauze masks still worked tirelessly to raise money and supplies for US soldiers fighting overseas, even constructing a “liberty flag pole” at the intersection of Main Street and College Avenue.

However, on November 11, 1918, the armistice ending World War I was signed, and crowds across the country spilled out to celebrate the end of the war, ignoring all public health concerns. This greatly contributed to the virus’s resurgence in late 1918, even in rural Idaho. In Burley, 57 new cases of the flu were reported in late November, yet officials lifted the ban on public assembly on December 1st (only to reinstate it a few weeks later). It wouldn’t be until late January 1919, after a few dozen more fatalities, that it was finally declared “safe” after it was hypothesized that 80% of the region’s population had been exposed, and were therefore likely immune.

Of course, it’s not 1918, and COVID-19 isn’t the Spanish Influenza, which killed anywhere from 1 to 6% of the world’s population. Our understanding of health care and sanitation are far greater than they were a century ago. However, among the many factors that accounted for the virus’s spread, it’s thought that the greatest contributor was human behavior[1], with regions that implemented proper distancing protocols suffering far fewer casualties than those that did not. For as much as we’ve already heard it, the best thing we can do to avoid spreading the coronoavirus and overloading our health care system is to stay home as much as possible and practice proper hygiene. Stay safe. Wash your hands.