The Major East Idaho Archaeological Site You Didn’t Know About

The major East Idaho archaeological site you didn’t know about

Maybe you knew about it. We shouldn’t assume. But for how significant the Wasden site might be, it’s surprising how little attention it gets.

In the desert west of Idaho Falls, between the city and the INL site, is a plot of land formerly owned by brothers-in-law named Leonard Wasden and Ken Huskinson. On it are three collapsed lava tubes, known as Dry Cat Cave, Coyote Cave, and Owl Cave. The first two have not been significantly excavated, but based on what archaeologists have found in Owl Cave, 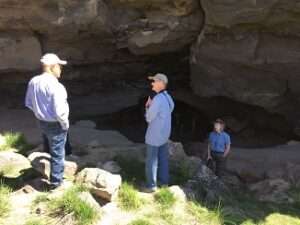 they might want to get on it. “When I was a student at ISU, the Wasden site was always talked about in hushed tones,” said archaeologist and Idaho Falls native Dr. Suzann Henrikson. “It was considered Idaho’s oldest and foremost archaeological site – the one that would put us on the map,”

Archaeologists from the Upper Snake River Prehistoric Society and ISU excavated Owl Cave off and on between 1965 and 1977. They found remains from bison, dire wolf, camel (!), and Columbian mammoth at different layers. The deepest and oldest layer – where the mammoth was – dates back about 14,000 years. They also found human objects such as a doll’s head and Folsom points – sharp arrows that a hunter could throw or attach to a spear). The artifacts demonstrate that Native Americans, including some of the first humans ever to live in what is now Eastern Idaho, used the cave for millennia. 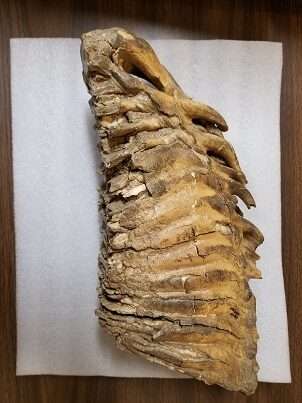 A two-foot-long mammoth molar from the Wasden Collection.

The kicker for archaeologists, though, is that some of the Folsom points found in the cave contained protein traces from elephant (or mammoth) blood. But according to accepted dates, mammoths went extinct before Folsom points showed up. There are possible explanations, such as Folsom-era people finding mammoth bones and using them to help fashion their points. But it may be that we have something entirely new here. Either way, more research at the Wasden site – and on the artifacts already removed – could produce some significant results. 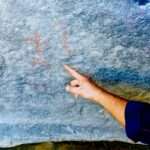 Meanwhile, we’re extremely excited by another recent development. For decades, every artifact that has or will come out of the caves has remained the property of Wasden’s and Huskinson’s descendants. That is, until just last month, when the family generously donated the entire collection of 80,000+ artifacts to the Museum of Idaho. Now, portions of the collection will be on public display as part of our new Way Out West permanent exhibit, coming in 2020 when our expansion and renovation project is complete. The collection will also be accessible to researchers.

Randy Harris, Wasden’s grandson, said “I am thrilled along with the rest of my family to play a part in bringing this nationally recognized collection back home to Idaho Falls.” According to Dr. Henrikson, “this site’s potential to tell the story of Idaho’s first people hasn’t even been scratched. That’s why I’m incredibly excited about MOI’s plans for the collection.” 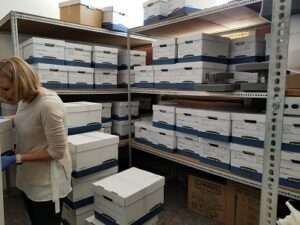