How about a little Idaho wildfire history to soothe your lungs on this glorious, smoky day?

Hurricane-force winds swept through the Idaho panhandle on August 20, 1910. “The wind was so strong,” said US Forest Service Ranger Ed Pulaski, “that it almost lifted men out of their saddles.” In what became known as “The Big Blowup,” the wind fanned a series of manageable forest fires into a towering behemoth that eventually swallowed 3 million acres, several small towns, and at least 85 people across Idaho, Montana, and Washington. By some accounts, the Great Fire of 1910 remains the largest wildfire in US history. 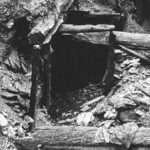 The entrance to the mine shaft used by Pulaski in the 1910 fire. Pulaski said he was unconscious when he heard one of his men remark that the boss was dead. In true legend form, Pulaski woke up, said “like hell he is”, and began crawling out.

The Big Blowup left a lasting impact on firefighting. For one, Ranger Pulaski, from Wallace, became a legend. When flames southwest of the town became too great to contain, he rounded up 43 firefighters and led them into a mine shaft under low visibility. He then hung blankets across the entrance and used his hat to scoop water from the mine and onto the blankets. The men eventually fell unconscious, but all except five survived the night and later crawled blindly to safety. The common firefighting tool combining an axe and an adze is named the Pulaski in his honor.

The museum’s fire bell, which rang from the Idaho Falls Fire Department’s downtown station starting in 1906.

1910 also had a major impact on how wildfires were fought – and not necessarily for the better. The US Forest Service (USFS) was a shaky, five-year-old organization then, and it won acclaim for its efforts to fight the fire and prevent it from spreading further. However, USFS leaders soon thereafter instituted a policy of immediate suppression of all fire — if possible, by 10am on the day one was discovered — believing they needed to completely vanquish all fire to survive as an organization. The service began working to discredit and suppress academics who argued that fire plays an important role in forest ecology. Of course, we now know those academics were right. Without occasional smaller, natural fires,  which trees can often survive, too much fuel can accumulate in forested areas. Fires under those conditions can grow larger and be more destructive to trees and soil. The USFS eventually reversed its position and now focuses on prevention and careful containment, even sometimes using fire to achieve certain objectives. But they probably could have saved much more of our land by just letting nature take its course all along.

So as you cough and wheeze your way to your car this evening and squint through tears up at the ominous blood moon bearing down, just know that it could be a lot worse. I guess that’s the lesson.