The story of how the Museum of Idaho came to possess allegedly cursed Egyptian artifacts needs to be prefaced with a bit of history. In November 1922, two men broke through the wall of an unknown tomb in the Egyptian desert. One man peered in. His account follows: “…as my eyes grew accustomed to the light, details of the room within emerged slowly from the mist – strange animals, statues, and gold – everywhere the glint of gold. For the moment … I was struck dumb with amazement, and when Lord Carnarvon, unable to stand the suspense any longer, inquired anxiously, ‘can you see anything?’ it was all I could do to get out the words, ‘yes, wondrous things!’” Howard Carter and Lord Carnarvon had discovered the tomb of Tutankhamun, better known as King Tut.

The discovery created a worldwide sensation, and it wasn’t long before stories began spreading about a curse on anyone who dared to break into a pharaoh’s tomb. The Times in London and New York World magazine published the best-selling novelist Marie Corelli’s speculations that “the most dire punishment follows any rash intruder into a sealed tomb.” It was not long before Lord Carnarvon died in Cairo, aged 56, and the lights in the city went out, which set off a frenzy of speculation. Arthur Conan Doyle told the American press that “an evil elemental” spirit created by priests to protect the mummy could have caused Carnarvon’s death.

No reference to a curse was actually found in the tomb, but the violent and odd deaths of various members of Carter’s team, as well as other visitors to the site, kept the story alive. Alleged victims of the curse included Prince Ali Kamel Fahmy Bey of Egypt, shot dead by his wife in 1923; Sir Archibald Douglas Reid, who supposedly x-rayed the mummy and died mysteriously in 1924; Sir Lee Stack, the governor-general of Sudan, who was assassinated in Cairo in 1924; Arthur Mace of Carter’s excavation team, said to have died of arsenic poisoning in 1928; Carter’s secretary Richard Bethell, who supposedly died smothered in his bed in 1929; and Bethell’s father, who committed suicide in 1930.

Carter angrily dismissed the whole curse idea as “tommy rot,” but when he died solitary and miserable of Hodgkin’s disease in his London flat in 1939 at age 64, the story of the mummy’s curse sprang back to life in his obituaries and has persisted to this day.

Speaking of this day: In 2012, the Museum of Idaho’s Director of Exhibitions, Rod Hansen, received a call from a gentleman with an interesting dilemma. He said he had possession of two statuettes that he believed had come from the tomb of Tutankhamun. He had owned the pieces since 1996 and believed them to be cursed. He offered this story:

In New York in 1855, two Bavarian immigrants created a successful business, providing a great deal of wealth for their family, including a descendant, “James” (we have changed his name out of respect for the family’s desire not to be further associated with curses). James became friends with Lord Carnarvon, who asked James to help finance an expedition. Following the discovery of Tut’s tomb, James traveled to Egypt and explored it with Carnarvon as a VIP. As a parting gift, James received two small bronze statuettes. Family lore says they were from King Tut’s tomb, and family history says that was the beginning of the end.

In 1929, the stock market crashed and James lost nearly everything: giant estates in New York and on Long Island, several companies, and almost the original company that had made his family wealthy. The statuettes remained with James as he fell deeper into debt. He endured three failed marriages, numerous other difficulties, and finally succumbed to an illness. He never attributed his difficulties to a curse, and in fact, on his deathbed, James willed the two statuettes to his then-unborn grandson.

His grandson grew up to be a decorated Olympic champion before eventually taking possession of the statuettes after he had settled down as a businessman. That’s when the trouble started. He was involved in several serious accidents as an athlete, and as a driver, and suffered numerous failed business ventures.

It was this gentleman – James’s unlucky grandson – who called the Museum of Idaho in 2012. At the time, MOI was hosting a traveling exhibition called King Tut…Treasures of the Tomb. Though the exhibit consisted predominantly of reproductions, rather than real artifacts, this gentleman was adamant about the curse and about getting rid of his two statuettes and donating them to the museum, where they would join with other pieces and be “together again.”

Rod had never seen the pieces, nor had the gentleman offered photographs. Rod doubted the tale, but after a week or so of research, much of the story was confirmed. These pieces don’t fit with MOI’s focus on Idaho, but when you work at a museum and someone offers you ancient Egyptian statuettes, you say yes. Rod took possession on behalf of the museum and arranged the necessary paperwork. He explained that he would arrange transport through an art shipper. “No, no,” the gentleman said. “I’ll take care of that.” 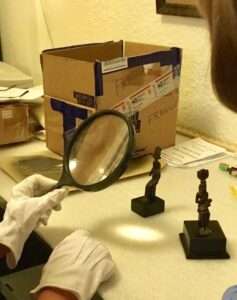 Rod waited. After several days, an uninsured cardboard box, with “fragile” hand-written on the sides, arrived. Inside a bar towel and two paper towels were two beautiful bronze statuettes: one, Isis and Horus, and the other, Horus the Child. They were mounted on wooden bases, with a patina. Though Rod is no Egyptologist, he was still skeptical of their authenticity, so he shared a digital image with an Egyptologist friend, who said they were “viable candidates as authentic.” The expert noted the depiction of the hair lock, the hand positions, and more. He said they resembled pieces from the 18th Dynasty (Tut), but were probably later. Possibly royal family, possibly same artist, and can’t rule out Amarna – the city built by Tut’s father, Akhenaten. He believed them to be authentic, with the exception of the stands.

Rod later attended a lecture on mummification by another Egyptologist, and following the lecture, approached the man and said “get a load of THIS!” (but in professional language). The expert was extremely skeptical of the story and the pieces, especially without documentation or provenance. However, he was curious to see for himself. Rod invited him to MOI, and upon examination, he was stunned to find them authentic, though not of Tut’s 18th dynasty. He determined them to be from the Late Dynastic Period around 600–500 BC. He believed them to be completely authentic with the exception of the stands, which he estimated to be of the 1920s – when the statuettes were presented to James.

So, although probably not from Tut’s tomb, the statuettes were so well preserved that they probably came from a tomb of some note. From there, they made their way to Idaho Falls, presumably, via foot, camel, train, ship, and first-class US Postal Service. 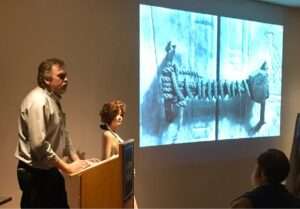 MOI Director of Exhibitions Rod Hansen speaks about the statuettes at a Museum After Dark: Slightly Irreverent Tour in 2018 (don’t worry about the mannequin).

The traveling King Tut exhibit moved onto another city, but the statuettes remained as property of the Museum of Idaho. They’re not usually on display, but we break them out every so often, such as during Museum After Dark events, and there are plans to display some of these out-of-place rare treasures in the future.

A couple of years ago, Rod told the story and showed the statuettes to a group visiting MOI from a local media company. Some months later, one of the company’s employees told me he was in the closing stages of receiving a home loan when he came to the museum and got the sneak peek. The deal fell through, which he credits to the curse. So… there you go.

I’m going on six years at the museum, and so far, I personally have received no cursed artifacts, but I have received one box that made me squeal. It was a satellite telephone from NASA, and the adventures that followed shortly thereafter were witnessed by much of the world…