NASA and Craters of the Moon (Idaho)

NASA and Craters of the Moon (Idaho) 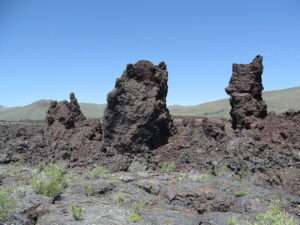 Don’t get mad at us for calling it “weird.” President Coolidge said so himself when he designated it a National Monument in 1924.

Craters of the Moon is a weird national monument, and it shall remain that way, at least for now. In recent months, some have lobbied to upgrade it to a national park, while others pushed to reduce its size. In fact, it is easy to miss its grandeur and importance. From the highway, it’s just a forbidding, black mass that confuses children and tourists on the drive between Idaho Falls and Sun Valley. But it is important, and not just for the spelunking or the hidden flora and fauna.

You probably know that the main feature of the park – the lava fields – came about when a series of volcanos erupted between 2000 and 15,000 years ago. You may also know the two major classifications of lava rock there: the jagged aa (ask a Scrabble player), and the smoother, slabbier pahoehoe (ask Alexander Graham Bell or Mr. Burns). You may even know that NASA sent astronauts there to train for lunar missions back when lunar missions existed. In August 1969, just a month after Apollo 11 landed on the Moon, four astronauts landed in Arco. Three of them – Eugene Cernan, Edgar Mitchell, and Alan Shepard – did make it to the Moon, and Joe Engle almost did. At Craters, the astronauts traversed the lava beds and studied volcanic geology so they could describe what they saw 238,900 miles from home. The four eventually discovered that the actual lunar surface wasn’t terribly similar to Craters, although they still said their experience in Idaho was helpful.

What you may not have known is that Craters of the Moon’s role in space exploration did not end there. NASA still performs multi-disciplinary research at Craters to better understand rocky planets and moons, how to detect life there, and how autonomous robots can better explore their surfaces. This excellent 5-minute video from the National Parks Service sums up some of the research nicely.

Craters may not technically be another world, but it could help us get there. And, by the way, it can help you see other worlds as well. Earlier this month, Craters was designated Idaho’s first International Dark Sky Park.