If there is one thing all museum folk have in common, it is our desire to say “TA-DA!” with flair as we watch you gasp at the wonder we have revealed. It’s a perk of our jobs that we all anticipate. Even the most stone-faced among us is overjoyed when the public reacts with amazement to an exhibit.

It isn’t like that every day. Most days we have an exhibit in place and the day-to-day work is runs smoothly on its own. The front-of-the-house staff gets to enjoy the public while the directors are doing paperwork and going to meetings. There is very little opportunity for most of us to whip back the curtain and take someone’s breath away.

I am working on my sixth year at the museum, and I have witnessed many “ta-da!” moments and even participated in creating those moments for the public.

I recall the first time I experienced a “ta-da!” moment that literally took my own breath away. 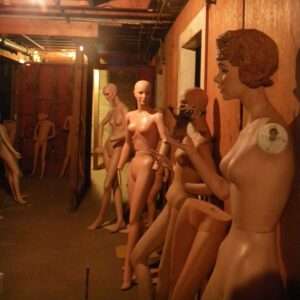 I had been at the museum for almost two years, and during those years, I had studied each new exhibit that came through, walked through the Idaho collections with our most knowledgeable historians, visited the archives where we store things like dinosaur bones. I had wandered through the warehouse and had my first meeting with Miles, and I had even walked through mannequin alley.

I had helped plan the first Haunted History Tour, held George Washington’s hair in my hand (a gloved hand, and the hair was in archival casing, but still) and participated in a few VIP grand openings. I was feeling pretty confident after George’s hair – maybe even a little jaded to the wonders our museum holds. And then…

I heard from our most knowledgeable historian that we had a mammoth behind the curtain in the Carr Atrium. LaDean Harmston was a tiny woman with vast knowledge and the eyes of a hawk, and I think she could feel the vibration of the air when anyone reached past a stanchion. She was a wealth of Idaho information and a fierce protector of our collections. I was afraid of her in that respectful way that I am terrified of all little old ladies.

When she told me about the mammoth, it was off-handed as we were walking toward the stairs. She was telling me of artifacts in May McCune Hall and casually said, “and there’s a mammoth behind that curtain.” I asked how big it was and if we could go see it. She told me it was as big as the curtain, and that it was completely walled in and there was no way for me to get back there. Don’t even try. 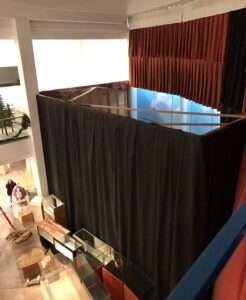 If you have been to the museum, you know the wall of which I speak. It’s the curtained wall that follows the giant window. I studied it from different angles – across the balcony, from the floor, on the stairs. I asked my coworkers if they knew that there was a mammoth behind that curtain and if they knew how to get back there. Of course they all knew. And they all told me I couldn’t go back there. It was blocked behind an exhibit. Don’t even try.

It is amazing how easy it is to forget about a mammoth in the room during daily operations. Thousands of people walked past that curtain every month, not knowing what lurked behind. Even I forgot, especially since there was no way to get back there, and I suspected that my colleagues were pulling my leg about the mammoth, or at least exaggerating the size.

Then the fateful day came that I was in the former Executive Director’s office taking notes for our capital campaign to raise funds for the expansion project. We were in the midst of a changeover, so there wasn’t an exhibit in the gallery – rather, there were boxes and crates.

Dave was talking artifacts with a board member and I said, “Did you know we have a mammoth behind the curtain?” OF COURSE he knew we had a mammoth. He also knew his name was Bia-Dekape, that he was life-sized, and one of only a handful of reproductions of its grandeur in the world. He remembered everything from the “Columbian Mammoth” exhibit of 2003 because he had been a part of the museum since it became the Museum of Idaho.

And then Dave said, “let’s look at it on your way out.” 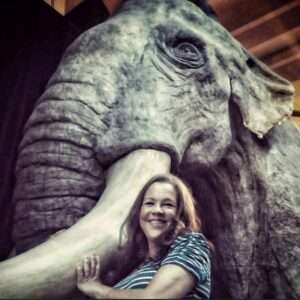 To get back into Bia-Dekape’s space, we had to walk through a tight passage with theater curtains on both sides. There was a heating vent jutting into the floor and the corner of a wall against the vent. To get through the narrow space, there was a need to duck, step over the vent, then part the curtains to stand up in a room with mammoth tusks looming over my head.

I literally gasped and clutched my heart. I’m pretty sure I clapped. I do that when I am really excited. Museum people love a “ta-da!” and Dave and the board member both laughed out loud and then talked about the history of mammoths in our region and how we would highlight our mammoth specimen, including teeth and tusks and a storehouse full of artifacts from that timeframe in Idaho’s history. I touched him – without gloves – and took pictures.

And pretty much since that day, I’ve been aware of that mammoth behind the curtain and I have been dying to show people. 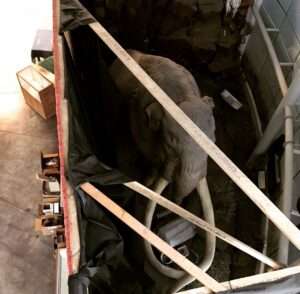 During one exhibit changeover, I got to ride a lift under the pretext that I needed marketing pictures of Bia-Dekape from above to show our “mammoth reason for an expansion” to the public. (Between you and me, I really just wanted an excuse to ride the lift and peek over the wall.)

One of the best parts of my job with sponsors is that I have opportunities to show off our museum and say “ta-da!” When I have taken people behind that curtain, I’ve always gone first so I can see the gasp of surprise and then the “WOW – I have been here hundreds of times and never knew this was here!”

The best news is that Bia-Dekape is no longer behind a wall. Just a curtain. And it’s temporary. We are shooting for a December opening date for our Way Out West exhibit and he will be the second thing that you see when you walk down the hall. He is in the Carr Atrium, looking out the windows towards the setting sun in the west. He’s been cleaned up and the rest of the exhibit is building around him.

The first thing that you will see as you walk down the hallway leading to the exhibit is a massive iron wall that is curved and covered in representations of petroglyphs cut out so you can see glimpses of the mammoth lumbering behind. 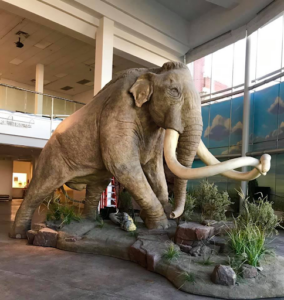 When you come around the corner of that beautiful wall – which is an art installation in itself – Bia-Dekape will be revealed. He isn’t alive (during the daytime anyway), but I am pretty sure that he will be thinking “ta-da!” when he sees your gasp of surprise.

I know that the staff, docents, and volunteers at the museum will be watching to catch the WOW on our guests’ faces. Museum folks love a good reveal, and there isn’t a better reveal than a mammoth reveal.