The first time I saw the monkey, it was in a contraband picture from someone not related to the museum. This person had access prior to him being a part of our Keefer collection, and she took a picture with him and a banana. I thought it was adorable and terrifying and I assured the woman I would not tell LaDean that she had the picture (and I still haven’t told LaDean).

I talked to other staff members about the Keefer collection and they showed me pictures and talked about the intriguing stuff that it contained, and we took a field trip to the secret warehouse and opened boxes and uncovered collections.  Have you ever watched a movie where people explore fascinating museum stuff? Or a documentary of a fabulous collection behind the scenes? That’s exactly what it’s like to walk through the MOI secret storage area. There are wonders and oddities and hundreds of things that make us say, ”You gotta see this – we have to put this display.” 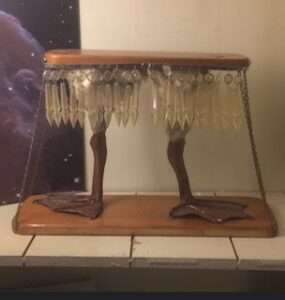 The Keefer collection comes from the Keefer twins. Fred and Frank were colorful characters in the early history of Idaho Falls. One was a sheriff’s deputy and one was sometimes on the other side of the law. They both did taxidermy. One of them was pretty good. The other was… still practicing?

There are things in the collection like a table lined with a metal strip from a plastic wrap container… and pelican legs (Miss Vivvy), and a footstool made from elk hooves. Don’t get me started on the chair with cow horns on the arms – it is fabulous. The Keefer collection is under lock and key with dim lighting, and the day I was there with two of my museum team was an adventure of opening boxes and finding more and more things that made me say, “ohhh… come here, come here, LOOK AT THIS!!”

In one of the boxes was the monkey with the pinecone. He had a cloth covering his body and when I removed it and saw him, with his little kissy lips and oddly shaped arms, I was both ewww—ahh—no no—what—? and awww, ooh. I love him! I immediately asked if I could put him in my office and was told no. He isn’t a prop – he’s an artifact. 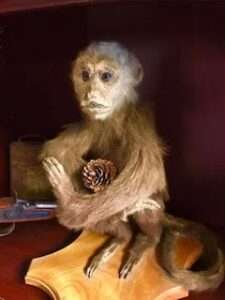 As it happens, the A-team has found many ways to bring that monkey out of his box. One of those ways is as the mascot of our Slightly Irreverent Tours (SIT). We do a monthly Museum After Dark (MAD – we love clever acronyms). Our very first SIT was “Crap Taxidermy” (an educational look at taxidermy throughout the ages AND some fine examples of great taxidermy and not-so-great taxidermy.) The monkey was part of the advertising and the star of the evening.

I wasn’t quick about getting him back to storage after his tour. In fact, I started begging double-time to keep him in my office (on a shelf where no one would touch – which is really easy because no one wants to touch him).

The plea that finally worked was this: “Please? Please. C’mon, please please please! I’ll name him Miles. You can take the children, but don’t you take my monkey.”  Then I showed our curator this video.

It worked! Miles was placed in a curation-approved spot on a shelf in my office, and I felt victorious for a couple days. It took about a week for me to second guess my choice to have Miles in my office.  Sometimes his beady little black eyes look like he is disapproving of my browser history and sometimes when people see him on the shelf, they say, “Ugh! What IS that? Why do you have that?” I don’t really have a good answer. It’s been suggested that having Miles in my office is one of the reasons I don’t date nice men. That’s laughable because that mitigates all of my other quirks… 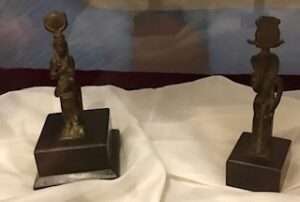