Mary Shelley and the Heart in the Drawer

Mary Shelley and the heart in the drawer

Remember what you were like at 18? What had you accomplished?

Ew, wait. Don’t tell us. Just think to yourself. By the age of 18, had you begun writing a literary masterpiece about humanity and ethics and science that arguably spawned a whole new genre? A masterpiece that nearly everyone alive in the Western world over the age of three knows something about?

You hadn’t, because you’re not Mary 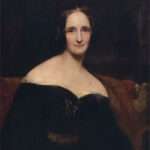 Shelley. She started writing Frankenstein at 18, and published it in 1818, when she was 20.

However, for such a promising professional beginning, Shelley had a rather tragic personal life. Her mother, the writer and philosopher Mary Wollestonecraft, died soon after Mary’s birth. Her father, another philosopher named William Godwin, later disowned her. In the months before she started writing Frankenstein, Shelley lost her half-sister and her first child, who was born premature. Her next two children died soon thereafter, followed shortly by her husband, the sometimes-loyal-to-her Romantic poet Percy Bysshe Shelley, who drowned while sailing in Italy. 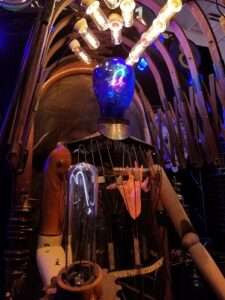 The Mary Shelley Humachine on display in her gallery at MOI.

In a dark note, after the cremation of Percy’s body on the beach, something survived the flames – an object that friends thought was his heart. Mary begged to take possession of the heart (or what she thought was his heart), which she kept for the rest of her life in her desk drawer, wrapped in some of Percy’s poetry. Ah, celebrities. Mary’s youngest son thankfully survived to old age, but she lived the rest of her 58 years a widow.

Your 18-year-old experience is sounding a little better now, isn’t it?

That it’s the 200th anniversary of such an important novel makes us at MOI all the more excited to honor Shelley through her own interactive gallery in our current Discover Steampunk exhibit. We’ve also been highlighting some cool hands-on educational activities through the National Informal STEM Education Network’s Frankenstein200 project.