Know your eras, or how to sound smart when you talk about dinosaurs

Know your eras, or how to sound smart when you talk about dinosaurs

People whip out long words when talking about dinosaurs, and if you’re like most of us, the words fly right overhead scaring everyone, like a pterodactyl. So we here at MOI have done a bit of research for you, and we’re going to talk briefly about how to identify enormous spans of time, such as the Jurassic Period. The goal here is twofold: 1) understand a little more about the world your favorite dinosaurs lived in, and 2) sound smarter when you talk about it. Win/win.

First, some context. Scientists divide geologic time into eons, eras, periods, epochs, and ages. We’re going to focus mostly on three periods – the ones dinosaurs lived in – but it helps to see the big picture. First, eons. Almost everything recognizable that has ever lived is part of the current Phanerozoic eon, which means “visible life”. Yes, there were three other eons before most life appeared on earth. Within our eon are three eras, each divided by huge extinctions: Paleozoic (meaning “ancient life”), Mesozoic (“middle life”), and Cenozoic (“new life”). If you’re keeping score, you currently live in the Cenozoic era. We’ll let you know if that changes, but it probably won’t unless a natural disaster destroys most life on earth, so you’ll probably notice.

So, that’s a lot already, but we’re here for dinosaurs. Within the Mesozoic era are three periods: Triassic, Jurassic, and Cretaceous. 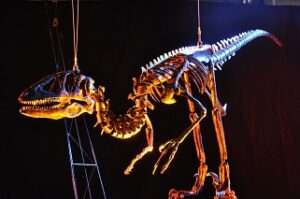 A sculpture of deinonychus, a raptor of the Cretaceous period.

The Triassic period was hot and dry, and most of the world’s land – all in the supercontinent Pangaea – was desert. Therefore, a lot of the big beasts at the time were aquatic. Early crocodiles showed up here as well.

The Jurassic period saw continents starting to really pull apart from each other, which meant more coastline, which meant more humidity and lushness. Tropical paradise. Some famous dinosaurs, like brachiosaurus and diplodocus, first showed up here, but despite everyone’s favorite dinosaur movie, most of the well-known species still hadn’t shown up yet. “Cretaceous Park” just doesn’t sound as good.

The Cretaceous period was a long one, warm at the beginning and a cooler time toward the end with extreme seasonal changes in weather. Shallow seas rose up over a lot of the land, including most of the present-day central US, and at times, even as far west as Idaho. This period hosted the big ones: tyrannosaurus, triceratops, ankylosaurus, etc. This heady time ended suddenly when, as far as we can tell, a huge meteor struck the earth, throwing an incredible amount of dust and material into the atmosphere, blocking the sun and creating an “impact winter,” which killed the dinosaurs.

So here we are, safe in the Cenozoic era, not getting eaten by dinosaurs. Better yet, now in 2018 AD, we have life-size dinosaur sculptures that you can move with video game controllers and lever-and-pulley systems. And when you come into the Museum of Idaho to do that, you can point your finger in the air and impress your date by saying, “actually, most of the dinosaurs from the movie didn’t even live in the Jurassic period.” Because everyone loves guys like that.