A new verdict in Idaho’s most famous murder trial

A new verdict in Idaho’s most famous murder trial

This past Friday, at the first running of our new Museum After Dark series, History Solved!, your friends and neighbors learned an incredible, star-studded story from Idaho history. They came (dressed to the nines), made deals, found clues, presented evidence, and delivered justice. And they changed history, for the justice they delivered was not the justice found in real life.

Now that their work is done, we can talk openly. First, real life:

1899. Members of the Western Federation of Miners (WFM) labor union hijacked a train near Burke, Idaho, fired shots, and destroyed more than $250,000 in mining equipment. Idaho Governor Frank Steunenberg declared martial law in Shoshone County and had President McKinley send in federal troops and throw miners into makeshift jails. Anger simmered toward Gov. Steunenberg for supporting the mining companies over the union men.

Six years later, at 6:45pm on December 30, 1905, Steuenberg entered the back gate of his home in Caldwell when a dynamite bomb exploded, shattering his windows, his right arm, and both of his legs. As passers-by gathered around, the former governor lay prostrate in the snow, demanding to know who shot him, and “for God’s sake, turn me over! I am dying!” They brought him inside, and 25 minutes after the blast, he was gone. 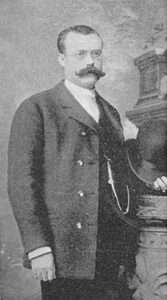 McParland, who was so famous (and apparently dapper) that Sir Arthur Conan Doyle actually wrote him into one of his Sherlock Holmes stories.

Within days, local police had tracked down a WFM man named Harry Orchard and charged him with murder. Meanwhile, the state of Idaho hired the anti-union Pinkerton National Detective Agency, who sent possibly the world’s most famous detective, James McParland, to the Gem State. McParland extracted out of Orchard a 63-page confession, wherein the assassin claimed he had murdered Gov. Steunenberg on orders from well-known radical labor leader and WFM official, “Big Bill” Haywood.

The State of Idaho paid half of its annual budget to hire the detectives and attorney/senator William Borah to try Haywood for murder. Clarence Darrow, probably the best-known defense attorney in the country, came to Idaho to defend him, the union, and workers everywhere, who saw the whole affair as a plot against them. The star-studded trial drew national attention, with one reporter calling it “the greatest trial of modern time.” 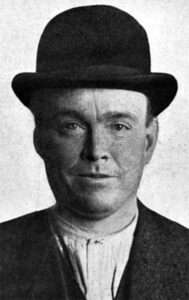 All the jury really needed to do was look at this actual photo of Orchard.

In real life, Big Bill was found not guilty. There just wasn’t enough evidence or corroboration to convict him of ordering the murder. After his acquittal and several more years of radicalism, mostly on behalf of his new union, the famous Industrial Workers of the World, he escaped to Soviet Russia. Orchard was tried and convicted for the Steunenberg assassination the following year. He spent the rest of his days – until 1954 – farming poultry out of a shack built within the walls of the Idaho State Penitentiary.

This all happened right here in our own private Idaho. Your friends and neighbors, however, not knowing the true outcome, on Friday convinced another miner to corroborate Orchard’s testimony, then found Haywood guilty, and sentenced him to die. What would have happened if Big Bill Haywood had not been around to agitate and lead strikes in the 1910s? What does this say about your friends and neighbors? These are the questions. More to come during the next running of History Solved!