A brief, gross history of taxidermy

A brief, gross history of taxidermy

An inland grizzly bear mount on display at MOI

In honor of our upcoming inaugural Slightly Irreverent Tour, the theme of which is “Crap Taxidermy” (Nov. 10 – buy tickets here), we present a brief, mildly disturbing history of stuffing animals. We have that in Idaho, if you haven’t noticed, so we might as well learn something about them.

First of all, the word taxidermy comes from the Greek taxis, or “arrangement”, and derma, or “skin”. Skin art, basically. Louis Dufresne of the Museum National d’Histoire Naturelle in Paris first used the term in 1803. Other terminology: a specimen is a full replica of an animal as it appeared in life, while a trophy is, for example, a lion head mounted on a wall. A mount is a general term that can mean either.

The first known taxidermists were the ancient Egyptians. They developed early forms of animal preservation using injections, spices, oils, and such. As early as 2200 BC, they were preserving and mummifying the pharaohs’ dogs, cats, monkeys, birds, etc., and burying them in tombs. They even preserved a hippopotamus, which must have been quite a feat. Since the purpose of taxidermy for the Egyptians had little to do with art or anatomy, the final products didn’t have to – and probably didn’t – look great by our standards. But hey, they tried.

Rockchuck, or yellow-bellied marmot, mounts on display at MOI

The earliest known mount in existence today is a crocodile hanging from the ceiling of a cathedral in Ponte Nossa, Italy. A document from 1534 references it specifically, so we know it’s at least that old. Several crocodiles show up on the list of oldest existing mount examples, probably because their thick skin makes them hardier.

Early taxidermists stuffed mounts with sawdust and rags, which sometimes disfigured them. For many years after the dodo’s extinction, people were wrong about how they looked because of such disfigurement. In contrast, modern taxidermists can purchase mannequins, which they can sculpt into different positions, then stretch and sew skins over them. Arsenic was widely used to repel insects from the late 1700s up until the 20th century – even the 1980s in some places – but it was phased out in favor of less dangerous chemicals like borax. 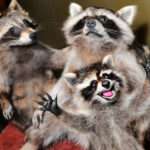 Taxidermy in the Victorian era was a popular way for European scientists and the public to examine foreign species they’d never see otherwise. The practice of stuffing pets began in this era as well, as did anthropomorphic taxidermy, wherein specimens were positioned (and sometimes clothed) as though participating in human activities like boxing or playing in a band.

Like it or not, the art of taxidermy has contributed to broader conservation goals. William Hornaday, chief taxidermist at the Smithsonian in the 1880s, was dismayed at the widespread slaughter of American bison, so he brought some specimens back to Washington and displayed them to draw attention to their plight. His work contributed to the creation of the federally protected bison range in Yellowstone, which was instrumental in saving the species.

The Museum of Idaho has more than a dozen mounts on display, including a grizzly bear, trumpeter

swan, and golden eagle, and many more in its collection. Some are beautiful, others less so. They originated from a number of sources dating from throughout the 20th century, including some from well-known Idaho Falls taxidermist Frank Keefer (1891-1976), who operated a small museum out of his home on East 14th Street. His mounts are some of the strangest of all.