There are a number of taglines we’ve been using to try to explain our new Discover Steampunk exhibit to confused portions of the public. The exhibit’s official subtitle is “A Fantastical Hands-On Adventure.” We’ve also been using “19th-century Visions of the Future.” Another one we picked up this last week is “Science Fiction Becomes Science Fact.” 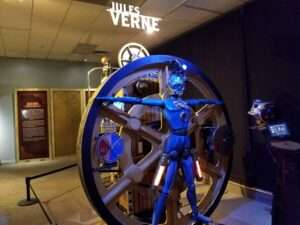 We kind of like that. In addition to the four esteemed Victorian-era inventors whose advances we highlight, there are three well-known writers: H.G. Wells, Jules Verne, and Mary Shelley. All three have been called the founders of science fiction, which, we know, can get hokey. But the whole genre shouldn’t be judged on the merits of movies like Santa Claus Conquers the Martians (1964). Good sci-fi has an impressive record of accurately predicting future technology and society, and Wells and Verne  in particular truly set the pace, foreseeing a number of things we’re just now starting to get down:

Obviously, this is only the tip of the iceberg, and many sci-fi writers besides Wells and Verne have made prophetic predictions. If you’re interested in more, the website Technovelgy chronicles literary mentions of future tech (starting in the 1600s) and tracks current developments of real stuff that once only appeared in fiction. If that’s any indication of what’s to come, those Martians better watch out, they’d better not cry, they’d better not pout, and I think you know why.

Experiment with machines inspired by Wells, Verne, and others at Discover Steampunk, on display at the Museum of Idaho through January 2019.